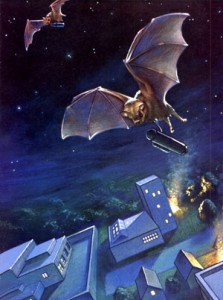 A problem of this blog is that it looks as if I am only really interested in Franklin Roosevelt, and particularly FDR anecdotes, when actually in my research FDR is a case study to better understand my primary interest: how does cultural memory work? How do stories about historical figures (like Roosevelt) become part of collective memory? How do these develop over time? And how can historical figures influence their own image in cultural memory? But those are abstract issues, and FDR is a perfect anchor for discussing those issues, providing wagonloads of stimulating visual material to boot. So in a sense, like many others (especially later US presidents), I fall victim to FDR’s continuing charm and popularity: whether I like it or not, it is hard to get away from the fact that this is an FDR blog. If you have tips to change this – do please let me know!

This Trivia Day, however, is a moment to indulge in simple FDR storytelling. One good old anecdote (that is, I think, relatively unknown within the canon of endlessly repeated and always newly emerging FDR narratives) is the story of the Bat Bombing Project. 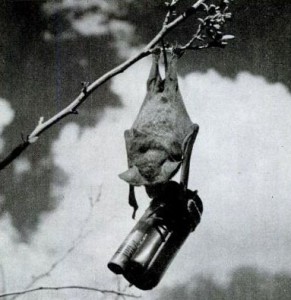 During World War II America was, like everybody else, looking to create a massive weapon to win the war. Famous among these is obviously the atomic bomb, because it was successful in its own dubious way. (By the way, I always think that FDR was lucky to die just in time before having to choose to use it – that decision was for Truman to make, and to remain associated with forever after). But another experiment in the search for a great weapon to win the war, was the Bat Bomb project. The plan was conceived by Pennsylvania dentist Lytle Adams, who knew Eleanor Roosevelt, and thus had relatively easy access to the White House. The idea, which FDR readily approved, was to drop “bombs” of bats on Japan’s mainland. One of the racist assumptions underlying the experiment was that the Japanese were extremely phobically afraid of bats. I have no idea why that assumption was never tested on some of the thousands of innocently incarcerated Japanese American citizens in the US, but in any case the bats in the bat bombs would also carry tiny bombs with them and so spread (at night, as is their wont) throughout the country, until their bombs would go off.

The project was well-advanced by the time it was called off, when it became clear that bat bombs would not be ready for combat until mid-1945. It had by that time cost $2 million.