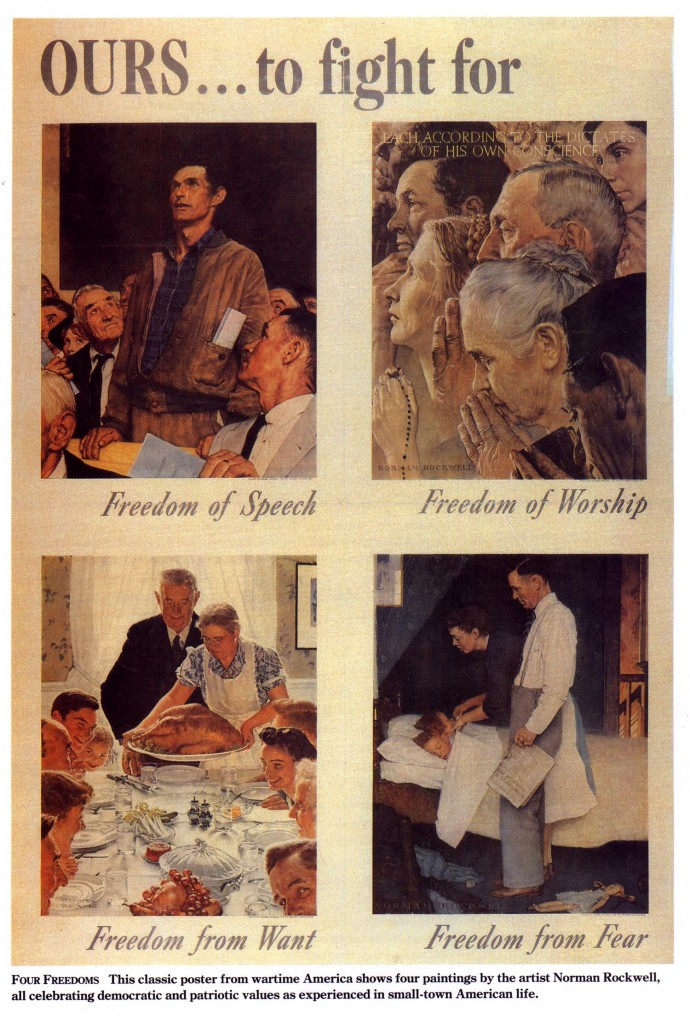 Now that this blog has existed for ten days, I think I should finally introduce the motto in the top right corner. It is an adaptation of what Arthur Schlesinger, Jr. wrote in Time:

Take a look at our present world. It is manifestly not Adolf Hitler’s world. His Thousand-Year Reich turned out to have a brief and bloody run of a dozen years. It is manifestly not Joseph Stalin’s world. That ghastly world self-destructed before our eyes. Nor is it Winston Churchill’s world. Empire and its glories have long since vanished into history. The world we live in today is Franklin Roosevelt’s world. (April 13, 1998)

This is of course not a conviction held by all Americans, but the central idea – in the 1930s and 1940s you had Nazism, communism and colonialism in Europe, but the American ideal of freedom and democracy has proved dominant – remains a mainstream view on the US’s role in the world since the Second World War. Roosevelt is obviously strongly connected with that view in American cultural memory.

FDR strongly believed in the importance of creating a powerful United Nations after the war, indeed he coined the term (let’s hope I’m right in saying this, I don’t dare to trust I am any more…), as his way of referring to the allied powers fighting Germany, Italy and Japan. And after his death, Eleanor actually became the US’s first Delegate to the UN General Assembly. FDR also formulated the Four Freedoms in a speech in 1941, which are still formally and informally treated as basic human rights. The Roosevelt Institute, “devoted to carrying forward the legacy and values of Franklin and Eleanor Roosevelt”, set up indirectly by FDR himself, and directed still by a number of his (great-)grandchildren, awards Four Freedoms Medals every year to individuals who “exemplify President Roosevelt’s vision of the Four Freedoms”. As such the Four Freedoms remain linked specifically to FDR in the public consciousness.

The iconic Norman Rockwell depictions of the Four Freedoms were reprinted large-scale in 1943 on posters and stamps by the federal US Government Printing Office. By the end of the 20th century 25 million people had bought Four Freedoms prints.