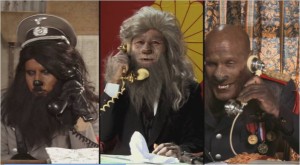 In the context of my current investigation of how the Second World War – and Roosevelt in relation to the war – have acquired their iconic status in American memory and popular culture, I try to watch all war movies that include a Roosevelt character. Which turns out to include films like FDR American Badass! (2012), a spoof action movie in the tradition of Naked Gun (and closer to home, but also more obscurely Abraham Lincoln Vampire Hunter).

In FDR American Badass! Roosevelt can still walk in 1931, until he is attacked by a German Nazi werewolf whom he kills, though only after he is bitten. Which is how he contracts polio. Hitler, Mussolini and Hirohito all turn out to be werewolves whose evil is stressed by the fact that they constantly shoot their messengers and telephone operators. Roosevelt has Einstein design a superhero wheelchair for him with which he singlehandedly defeats the axis powers.

FDR American Badass! is obviously made to entertain (with rather crude humor), but it also assumes a lot of knowledge of Roosevelt trivia – it makes references to details of Franklin and Eleanor’s marriage, features one of their sons, and the Georgian rehabilitation center FDR used to exercise his paralyzed legs, etc. – and on the other hand it treats the war in a way that is so crude that it would hardly be acceptable in Europe. Somehow, the stereotypical accents and attributes of Hitler, Mussolini and Hirohito make them too silly and clownish in relation to how they are perceived in Europe. Why is that? What is precisely the difference between the role of World War Two in American vs. European cultural memory that makes a film like this acceptable (if bad) there and somewhat offensive here? Of course I realize that there is not ONE “European” cultural memory of the Second World War (nor a single American one, for that matter). Still, this seems to be a film that is not politically correct anywhere, but not-pc in a good crude-but-funny way in the US and in a bad way here (Europe? The Netherlands? Amsterdam? My own narrow mind?) How does that work?