My week, and an ode to social media 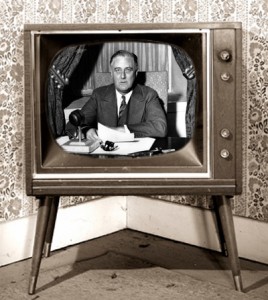 Unlike FDR, I’m not quick to pick up on media trends. I’m neither good at passively inferring things from the media (can’t concentrate very well on tv programs, even when genuinely interested), nor at actively using them (leaving a short-and-to-the-point voicemail message). So no one should be (or was, as far as I know) surprised that I’ve taken a long time to get into blogging and using Twitter and Facebook. It’s hard to know how to use them to your own and others’ advantage, or at least non-annoyance. Then again, I suppose that’s also true of face-to-face conversations. Which, apparently FDR was also extremely good at.

But this week has been successful both in the sense that I’ve had a few really great conversations related to my PhD and that I’ve really profitted from the knowledge and cleverness of (sometimes remote) friends and acquaintances through Facebook. I was looking for a word that refers to the cultural process whereby something (or someone) turns into an icon. Iconization, or iconification, I’m inclined to say, but that doesn’t sound like an existing word (it doesn’t appear, for instance in the Oxford English Dictionary). Posting this on Facebook as a question raised about 60 responses (including 20 or so on the Facebook page of a friend who passed on the question to her friends!). I’m still not sure I have found the word (although reification is the best so far), but practically all the words suggested are somehow useful, and discussing the nuances implied in the various options has really helped me to develop my thinking. Also, some people have come up with great reading tips, critical questions and general consolation in other forms.

I know that almost everything is wrong with Facebook and I remain vaguely scared of it. But this was really a great experience, and I can’t think of any other way to mobilize so much latent knowledge and expertise in my circle of friends. The especially good thing is that some of the people who reacted are people who in real life I would hardly have thought to ask. It’s very good that I also had some really great face-to-face conversations with people this week, or I would have given that up completely. But if you think of a good alternative for iconification (the process by which an event – say World War II – turns into or produces one or more cultural icons) please do get in touch!