Jay Winter and the Definition of Collective Remembrance 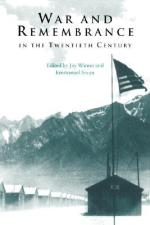 One of the most important memory scholars – and, I believe, the man who coined the phrase “Memory Boom”, to refer to the massive increase in popular cultural and academic interest in memory (rather than or alongside history), is Jay Winter. One of the book he has edited, War and Remembrance (Jay Winter & Emmanuel Sivan, eds, Cambridge University Press, 1999) opens with a definition of collective remembrance which I find very useful:

Collective remembrance is public recollection. It is the act of gathering bits and pieces of the past, and joining them together in public. The ‘public’ is the group that produces, expresses, and consumes it. What they create is not a cluster of individual memories; the whole is greater than the sum of the parts. Collective memory is constructed through the action of groups and individuals in the light of day. Passive memory – understood as the personal recollections of a silent individual – is not collective memory, though the way we talk about our own memories is socially bounded. When people enter the public domain, and comment about the past – their own personal past, their family past, their national past, and so on – they bring with them images and gestures derived from their broader social experience. As Maurice Halbwachs put it, their memory is ‘socially framed’. When people come together to remember, they enter a domain beyond that of individual memory.

Among the mass of definitions of memory, remembrance and adjectives the two are combined with (cultural, collective, communicative, performative, prosthetic, multidirectional etc.) that has since evolved, I find this relatively simple definition extremely helpful. Particularly the point that collective remembrance is not the same as individual memory, but rather something that is created within a group and in communication, is I think an important insight. However, I would not say that “the whole is greater than sum of the parts” – rather that the whole is different (which actually, I think, is what Winter & Sivan mean). Collective memory is highly constructed – the product of a group negotiation – and thereby implicitly, but unavoidably ideologically charged. This is, though I think to a lesser extent, also true of “socially bounded” individual memories, which is why it is important to understand the make-up and sources of the “images and gestures” through which individuals understand and contribute their memories.

I think one important source AND expression of cultural remembrance is film: it’s obviously hard to prove, but I think many people’s mental image of the Civil War in America, for instance, is highly influenced by Gone with the Wind (1939). The same is true of memories of World War Two – what we think we “remember” about the war is actually in part derived from cinematic representations, which is all the more reason to take seriously such representations, rather than simply reject them as “historically inaccurate”. The fact that they are not historically accurate is in a sense irrelevant if the representation nonetheless continues to influence collective remembrance.

Anyway, enough intellectual musings for one Sunday morning (and it’s not even a Memory Day). All this was triggered by the fact that I can’t get started writing something else. And by the much more exciting fact that I’m going to meet Jay Winter later this week. So more about this will follow soon. One question to end, though: Winter & Sivan in the quote seem to use memory and remembrance interchangeably, but to me they seem to refer to different things. What do you think? What is the difference in nuance between them?