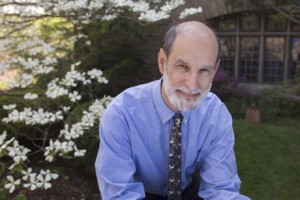 This blog post interrupts a series of conference reports, in order to draw attention to and remember the death of Professor dr. Michael Kammen, who died last Friday.

One unequivocal classic in American memory studies is Michael Kammen’s book Mystic Chords of Memory: The Transformation of Tradition in American Culture (first published in 1991). It argues, among other things that memory in America is used to depoliticize the past – a thesis that is important to my dissertation and has greatly inspired my own thinking. Depoliticizing the past is of course a highly political act in itself – one that FDR was very good at – as Kammen has shown convincingly in, I believe, Chapter 14 of Mystic Chords. This in many ways his masterpiece (although he won a Pulitzer Prize for People of Paradox) but I personally particularly like Visual Shock: A History of Art Controversies in American Culture (2006), which contains a great discussion of the history of the FDR Memorial in Washington.

So when, in the summer of 2010 – just before I properly started on my PhD – I was in New York state for research, and we spent some time at Cornell, I decided to email Michael Kammen on the off chance. He immediately wrote back that he’d be happy to have coffee together the next day. It was really great to meet him. I now read in obituaries that Kammen died at 77, but I wouldn’t have believed then that he was in his seventies. He seemed full of new ideas for books and research (also for my research). Briefly after my visit he emailed me a list of streets, avenues, bridges, schools etc. that had been named after FDR. I still have it, and have never really known what to do with it. I wish I had asked in more detail why or how I could make it relevant to my research. It’s one of those things I’ve always vaguely intended to write him about, but never did. Anyway – I don’t think it really is that relevant to my research as it has developed, but it seemed representative of his enthusiasm for memory, American culture and teaching. I wish I’d known him better.

Did you know him better? Or would you know what to do with such a list? Please share!