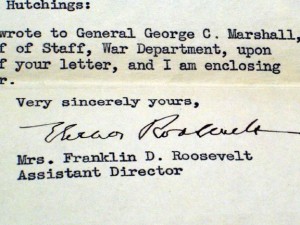 I am currently working on a chapter treating Eleanor Roosevelt as an element in FDR’s autofabrication and in his public image as it has developed since. One problem that keeps cropping up is what to call her. I often tell literature students not to refer to an author by her first name only, because writing “Virginia” practically precludes the possibility of taking Woolf’s work seriously (“And you wouldn’t write ‘James’ if this was an essay about Joyce either, would you?”).

But now I find myself having the same problem with Eleanor Roosevelt. Just “Roosevelt” is awkward, because then it is often unclear whether I mean Franklin or Eleanor (or even Theodore, which is why I don’t usually call FDR just Roosevelt either). But the full name is annoyingly long especially when I need to refer to it very often. ER is an ok, but not to my mind very elegant solution – clearly analogous with FDR, but without the ring of a nickname. FDR, JFK and LBJ are fine acronyms that have come to work well as epithets, but ER feels contrived – like HST or BHO.

Eleanor, by my own argument, should be a no-go, except that she often publicly referred to herself as such, especially as first lady. Only later, after her husband’s death did she start to sign her name as Mrs. Roosevelt, or even more archaic: Mrs. Franklin Roosevelt – clearly as a means of reminding the readers of her closeness to FDR. “Eleanor” was used particularly, by both the Roosevelts, to position her as the domestic, approachable, intimate and informal element in the Roosevelt White House. Thus Eleanor Roosevelt was marketed and marketed herself specifically as feminine – and therefore of course less powerful, but with a particular womanly, gentle, form of agency herself. From that position – also because she seemed relatively inconspicuous and unthreatening as a female – she could and did exert a great deal of influence. She famously gave press conferences for women only, so that newspapers were forced to keep on female journalists to cover the White House, and organized a massive concert by African American opera singer Marian Anderson at the Lincoln Memorial after Anderson had been refused to possibility to perform at the Constitution Hall by the Daughters of the American Revolution. Eleanor Roosevelt was able to do those things because she cleverly made use of being an informal figure, with no official role or visibility, an Eleanor.