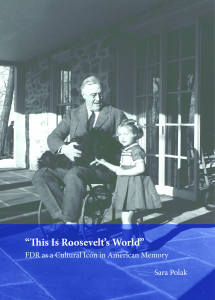 The third proposition to my thesis is probably the hardest to defend, but it’s also one of my favorites. FDR was wheelchair-bound, as most people nowadays are aware. This is not something US members of the public would have known during his presidency – it was well-known Roosevelt had had polio, but every effort was made to keep the wheelchair, and the fact that FDR could not walk, out of the public view. He “walked” to the rostrum using leg braces, a crutch and the arm of his son, the rostrum had to be screwed to the floor so he could lean on it, and he had a gentleman’s agreement with the press that they would not photograph him in his wheelchair.

And he was very aware of how cultural memory was based on elements of things that were said, photographed, broadcast over the radio, and otherwise mediated, pieced back together by future audiences with their own stake in remembering and representing the past in a particular way. This form of memory based on mediated material, which we don’t even need to have witnessed in person, but which do nonetheless constitute building blocks of what we re-member, has been called “prosthetic memory.” It is not meant to  mean “memories of prosthetic devices” but memories that we put on as if they were prosthetic devices. However the cultural memory of FDR in a wheelchair is largely a prosthetic memory, not just of a prosthesis, but also acquired through the internalization of fictional images of FDR using prosthetics. I would even go so far as to suggest that Roosevelt, even though he did not know the term prosthetic memory, was peculiarly apt at engendering prosthetic memories. Partly this may have been his own personal talent, developed in the wake of his affliction: because he had to suggest things to audiences’ imaginations (e.g. that he could walk just fine) he knew how to create ‘gaps’ in his narrative for other mediators to fill in. But also on the side of the beholder, it is an important insight in narratology that disability in stories almost often has the function of inviting more story-telling (to explain or ‘resolve’ the disability) and therefore, if the stories are about a historical figure, to produce prosthetic memory. Thus, the third proposition to my thesis is:

“To support his disabled body, Franklin Roosevelt depended on a range of prosthetics – particularly a wheelchair which only emerged into cultural memory decades later – and he was highly attuned to the possibilities and advantages of engendering prosthetic memories. The wordplay here is not merely fortunate but meaningful in understanding how his self-fashioning enabled his autofabrication and vice versa.”