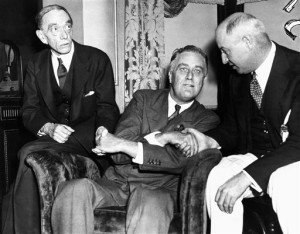 The fifth proposition represents, I would say the most high-level, over-arching conclusion to my thesis, the idea that FDR through his rhetoric, autofabricated a public image that is profoundly plastic. I don’t use plastic here to mean “fake”, but flexible – although the creation of a flexible public image does call for a rhetorically astute approach to authenticity that allows audiences to believe it is artless, but is not itself naïve.

Franklin Roosevelt often presented himself as informal, and open about his thoughts, strategies, and personal experiences, while being very selective about the precise details of what he was open about (for instance, with regard to his private life, his dog Fala showed up regularly in relative details, but not his experience of being disabled). A famous example of the simultaneous frankness and deviousness of his rhetoric is this quotation about his role in the American war effort:

You know I am a juggler, and I never let my right hand know what my left hand does. I may have one policy for Europe and one diametrically opposite for North and South America. I may be entirely inconsistent, and furthermore I am perfectly willing to mislead and tell untruths if it will help win the war.

“I am a juggler, and I never let my right hand know what my left hand does,” reminds of the liar paradox (“This sentence is false.”) because Roosevelt is actually compellingly honest about his own dissimulation. “You know” in the full quotation enhances this effect, because it makes the addressee complicit in the performance of enchanting deception. Thus Roosevelt assertively licenses himself to “mislead and tell untruths,” a claim that would perhaps only have been acceptable in 1942, in the context of the war. However, this quote is remembered, explicitly through Warren Kimball’s book The Juggler, and implicitly also in the film Hyde Park on Hudson, as speaking to an admirable quality. Many of his best remembered words have this same vagueness – “the only things we have to fear is fear itself” is a case in point – and therefore allow for re-appropriation in a wide range of contexts. Or as the fifth proposition has it:

“Franklin Roosevelt remains relevant to the present and future because he positioned himself as a, not limitless but malleable, space into which needs, desires, ideologies, even aversions, can be projected.”