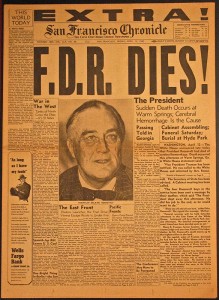 In the wake of “De Wereld Leert Door”,  I have received various emails along these lines:

Dear Sara, I was born in 1944. My father was in the army so he couldn’t be there, but he named me Franklin, after Roosevelt. I just thought you’d like to know.

Many people born around that time, particularly in the US, but clearly also in the Netherlands, retain a link with FDR because they were named for his sake. Many others (particularly Americans), when I tell them I research Roosevelt’s place as an icon in American memory tell their own earliest memories of him, often of his death. “It was the first time I saw my father cry”, is an almost suspiciously often heard flashbulb memory. I have not quantitatively measured how often I’ve heard this, nor have I critically investigated whether those (now of course long dead) fathers really did cry on that occasion, but it seems to be a memory that almost transcends the personal, and has become collective. As if seeing your father cry was an innate part of the American experience in April 1945.

A while ago I came across an article by two psychologists, who had taken the opportunity of Roosevelt’s death to measure the first reactions of students (in relation to their political preferences), by carrying out a survey on April 13th, a day after the event. Among their most prevalent reactions was, not surprisingly, worry about the progress of the war effort without FDR. When people tell their memories of Roosevelt’s death, this practically never comes up. Understandably, I suppose, because we now know, and have known for a long time, how the war effort would end. That does not mean I think people lie about their experience of Roosevelt’s death. But it does show how much memory is a construction influenced by later knowledge and experience. FDR’s death probably was an early case of mass-experienced grief, similar to later collective flashbulb memories like Kennedy’s and King’s murders. Because of such later events, the collective grief aspect of FDR’s death has always remained relevant, whereas the worry about the war has not.