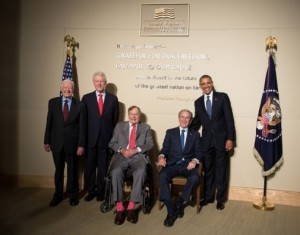 One problem with the daily categories on this blog is that some are much easier to fill than others. I always have inspiration to write about autofabrication, media or memory and rarely miss the opportunity to report about my week, but I never quite know what to do with News & Events Day. I could change the categories, but that feels like cheating, especially as long as I haven’t seriously experimented with the idea of having a News & Events Day. Then my twitter account suddenly overflowed with news of the dedication of the George W. Bush Presidential Library and Museum – an event if ever there was one, and FDR-related too!

The Bush Center, which was dedicated on April 25th 2013 and is open to the general public as of this coming Wednesday, is the thirteenth presidential library. The others are dedicated to FDR’s predecessor Hoover (who was still alive when FDR opened his library, and stole the good idea), and his successors Truman, Eisenhower, Kennedy, Johnson, Nixon, Ford, Carter, Reagan, Bush sr. and Clinton. The George W. Bush Presidential Library and Museum holds: 70 million pages of paper records; 43,000 artefacts (including the bullhorn Bush used to speak to first responders working on ground zero after September 11, 2001, and a custom-designed dress worn by his wife during an important dinner); eighty terabytes of electronic information, including more than 200 million emails and 4 million digital photographs; and nearly 50,000 audio and video tapes. In short, more than we’ll ever want to know or be able to plough through.

The idea of creating a Presidential Library remains very intriguing (especially now that it will be Autofabrication Day in a few minutes), as does the presidential library system. As the NARA-website says: “Presidential Libraries promote understanding of the presidency and the American experience. We preserve and provide access to historical materials, support research, and create interactive programs and exhibits that educate and inspire.” So there is a claim that “the American experience” (which of course is not ONE thing) is reflected in these institutions, which are actually generally highly political and celebratory. Although I think there was (and is) also real idealism at the bottom of these institutions, there is something undeniably megalomaniac about creating an institution for research and education about yourself. It’s now a standard practice, but in Roosevelt’s time, it was understandably also received with skepticism. One of my favorite cartoons reflecting that is this. 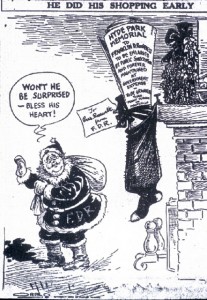 He did his shopping early: Hyde Park Memorial to Franklin D. Roosevelt to be enlarged by public subscription and forever maintained at government expense – to be grander than Mount Vernon or Monticello. (To Pres. Roosevelt from FDR). (Chicago Tribune, December 13, 1938)