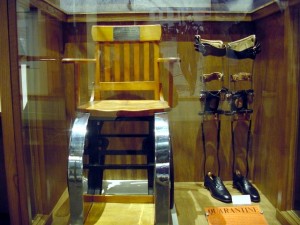 The abundance of writing, film, sculpture and other kinds of portrayals of FDR’s disability in popular culture and elsewhere and the overwhelming media sensation a tiny clip of footage of Roosevelt in a wheelchair causes, suggests to me that we currently crave such narratives. Somehow, modern audiences long for intimate and searching histories of how FDR experienced his illness and subsequent invalidity, how it affected him psychologically and how it contributed to his heroism during his presidency. I like most people in cultural analysis/memory studies, I would argue that this is not necessarily because that was FDR’s most important attributes historically, but because it satisfies a kind of cultural need or desire we have today. Of Roosevelt’s many important and intriguing characterics, makers of films like Hyde Park on Hudson and Pearl Harbor pick this one to focus on, because it offers something their audiences will be able to relate to. Of all there is to remember about Roosevelt, we thus collectively choose to remember the fact that he was paralyzed.

Alison Landsberg has introduced the term ‘prosthetic memory’ (in her 2004 book Prosthetic Memory). The term refers to those ‘memories’ we acquire without ourselves having lived the remembered events. The argument is that even if we are born much later, we can have ‘memories’ of, say, the Second World War, because in this age of mass media, we have seen and related to mediations of the war on a highly personal and formative level. Such ‘memories’ Landsberg calls prosthetic memory. I think that is a useful term – in any case it is good to have a term for such ‘memories’ of events one has not personally experienced, because on the one hand it is clear that they are culturally important and powerful (as are the mediations that create them) and they do indeed resemble actual lived memory, but on the other hand they of course are not the same as lived memory.

I am intrigued by Landsberg’s choice of the adjective ‘prosthetic’, because it suggests that – for us as much as for FDR – the wheelchair and the leg braces offer a kind of support, for our perception of ourselves and our culture if not for our actual body. The memory of Roosevelt’s prostheses are mainly for us a prosthetic memory, in the sense that we ‘remember’ it because we have seen it in films and they serve a cultural need. The question then is: what missing limb do they replace? Or to continue the metaphor, what silence or untold story is contained in our own interest in Roosevelt’s silence about his disability?