FDR as an American Body 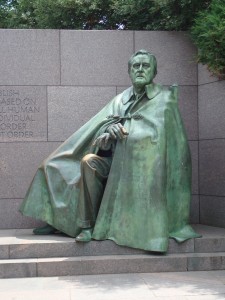 This is the first in a series of short blog posts in which I hope to summarize briefly what I have been trying to argue at the various conferences I have attended over the last month.

The first was in Liverpool on 25 October, titled “American Bodies through Time and Space”. My contribution was titled “Don’t Hide FDR’s Source of Strength – Franklin D. Roosevelt’s Disability
in American Memory”. I tried to show how Roosevelt’s body is often in American memory taken to symbolize, indeed embody, the US as a whole. In more general terms, this idea is not at all new – the seminal monograph here is Ernst Kantorowicz’s The King’s Two Bodies: A Study in Mediaeval Political Theology.  Put very briefly, Kantorowicz argues that medieval kings had two bodies: a physical “body natural”, as we all have, and a metaphorical “body politic”. Medieval kings, according to Kantorowicz essentially embodied their kingdoms – the power was literally vested in their body and they could personally represent their entire country.

This is of course not true for American presidents (nor for modern kings): in a democratic setting an individual can by definition never truly represent an entire people. But the idea of two separate states of being united in one leader survives. Roosevelt was a private person, whose private body somehow mattered for his public function, and a public embodiment of the American nation – a function that also had an impact on his physique. I focused my presentation on the first part of this two-way street. How can Roosevelt’s disability be taken to represent America’s disabled body politic? And how did Roosevelt himself, and does later memory-making – in this case at the FDR Memorial in Washington DC enhance or combat this idea? 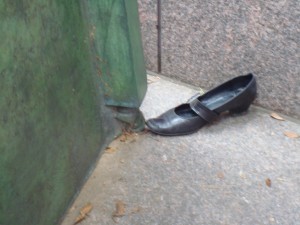 As a concrete example I discussed that memorial, and the vicious debate over how to portray Roosevelt’s disability in it, that preceded and overshadowed its dedication. Initially only the above sculpture of FDR seated and wearing a large cape was included. When the Americans with Disabilities Association lobby demanded that his wheelchair would be explicitly portrayed, the memorial designer Lawrence 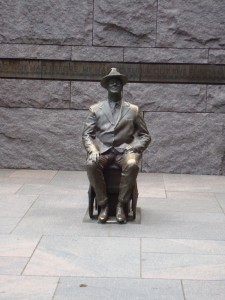 Halprin added tiny wheels to Roosevelt’s chair, but this was not enough of a concession. When angry protesters eventually threatened to disturb the memorial’s festive dedication ceremony in May 1997, president Clinton – like FDR a great fan of consensus – resolved the issue by ordering an attachment to the memorial in which Roosevelt is portrayed in his wheelchair, dedicated in 2001.