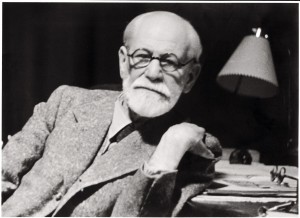 When I was about 16 years old, I read a lot of Freud. Case histories mainly, but also the more theoretical work. I think it is fair to say that this has greatly influenced my thinking. I always have surprising difficulty explaining to students why he remains an important figure, mainly because they don’t believe his theories. Of course, many of Freud’s theories are blatant nonsense. Like the idea that menstruation pain is the manifest expression of a latent desire to be penetrated by one’s father. That is Just Not True. Other things are true, though. Like the idea that what happens to you in infancy is of crucial importance to your later development. And the idea that practically everyone has a little bit of practically every ‘disorder’.

But more important is that these and other Freudian theories have been internalized in the western world. Whether or not dreams really ARE expressions of repressed desires or traumas, we think of them as such, or at least as non-deliberate products of our own minds that may reveal something about us (and not e.g. as messages whispered in our ear by the devil). Freudian thinking has provided a strong and convincing frame in which to understand many psychological phenomena and behaviour. Even if incorrect, misogynist, scientifically unfounded or otherwise wrong. It has been particularly influential in literary criticism. We tend to understand, say, a poem, as a narrative with missing elements, and as literary critics, we try to question it, in order to recover repressed or  forgotten underlying messages. Read out (loud) a poem like William Wordsworth’s (1799):

A SLUMBER did my spirit seal;
I had no human fears:
She seemed a thing that could not feel
The touch of earthly years.

No motion has she now, no force;
She neither hears nor sees;
Rolled round in earth’s diurnal course,
With rocks, and stones, and trees.

Many people who read this out, will accidentally read “sees nor hears” (6th line) – an understandable misreading, because read that way, the line rhymes with the second and fourth. If you do that, the last line should also be made to rhyme with the other even lines, revealing “tears” (instead of trees) that, just under the surface, do seem to be really there, in the sense that the poem, even without tears, does seem to be about death and grief. Thus, a poem (which predates Freud by about a century!) in a sense puts a Freudian slip into the reader’s mouth. And this is how we teach students to read poetry  – a method I genuinely believe enriches the art it concerns.

So, a very long introduction to the 1899 Freud essay I read for the first time a couple of days ago, titled “Screen memory” (Deckerinnerung). This treats the kind of very early childhood memory in which nothing particularly interesting occurs. The essay starts out to suggest that most memories actually remember momentous events, but these early fragments often don’t. It then goes on to suggest that these very early memories are remembered because they have become ‘screens’ for other things (later desires, other traumatic youth memories, sexual frustrations etc.). Unlike much of his other work, this essay regards this mechanism as occurring in healthy individuals (the essay cites the introspective exercises of a ‘friend’, almost certainly Freud himself), and does not question the authenticity of the memory itself. But he does argue that there is a discoverable reason why that particular memory is retained, despite its seeming banality. Screen memory is perhaps not the most literal translation possible of Deckerinnerung (“cover memory” might have been more literal), but it is very felicitous. It casts the childhood memory both as covering up whatever repressed or otherwise concealed memory it screens off from view, and as a screen on which it is after all projected.

Now how is this relevant to my research? I try to understand how FDR is remembered (on a collective, cultural level, however) and in my research am often struck by the seeming overemphasis on particular issues that constantly return in FDR remembrance (like his disability). Could it be that those memories are somehow representative of something else too? Do these cover-ups and projections of traumas (desires, latent needs, etc.) through and onto seeming trivialities about FDR also happen on a more collective level than the individual? I think so! More about how this works precisely to follow soon.