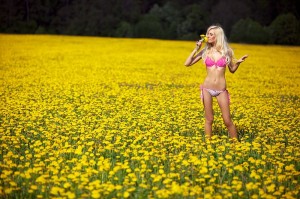 As mentioned in the previous post, I think many current-day Roosevelt memories in films, documentaries, memorials etc. have the structure of screen memories, or perform functions in collective memory that Freud’s screen memories perform in the individual. That means that the overemphasis on, from a historian’s perspective, seemingly irrelevant aspects of Roosevelt remembrance, point to repressed desire or trauma of the rememberer (or rather, the collective of rememberers).

This theory provides a way to ‘read’ the emphasis on Roosevelt’s polio and wheelchair. In “Screen Memory” Freud’s friend recalls a scene in which he as a young child picks flowers which are extraordinarily beautifully yellow, and tastes bread that is exquisitely delicious. This refers in Freud’s analysis to his friend’s desire to “pick the flower” of a young woman he is in love with in the present (and whom he has seen wearing a yellow dress) – he wants metaphorically to have his cake and eat it too, as the second part of the childhood memory suggests.

In the memory of FDR, if one thing is surprisingly emphasized in recent memory, it is his wheelchair. I have expressed amazement about this emphasis before – for instance, when last summer a clip of film footage of Roosevelt in his wheelchair was discovered, and this became world news. Why is something so small remembered as so prominent? Like Freud, I would suggest that, while the memory is accurate (the flowers in the friend’s memory probably were yellow, and Roosevelt did use a wheelchair), the emphasis on these aspects points to something else, which remains obscured.

The next question is then what Roosevelt’s handicap and wheelchair “stand for” in the American collective psyche. If it is a foil or a “screen” for something else that doesn’t sit so easily in American memory, what is that latent thing? I have several provisional answers, which I’ll explain in due course – but what do you think? What (if any) latent worry/trauma/desire in the American collective subconscious underlies the suspicious omnipresence of FDR’s wheelchair?