Ariella Azoulay and the Roles in Photography 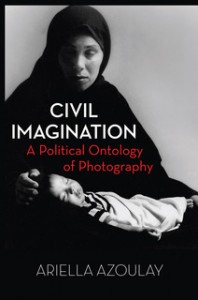 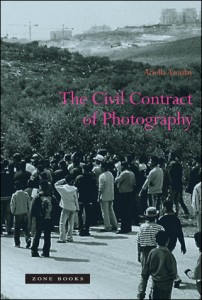 Next to blogging about my adventures in New Haven and what field I am in, I would like to blog weekly about one of the things that have inspired me in my research this week. It’s already nearly two weeks ago that I attended a class by Laura Wexler about Photography and Memory that drew my attention to the work of Ariella Azoulay. I have since been immersed in two of her books: The Civil Contract of Photography (2008) and Civil Imagination: A Political Ontology of Photography (2012). Her work is essentially about the role and ethics of photography as a practice. She is not only, and not in the first place, interested in the photograph (the picture, the thing) as such, but rather in the process of photography and in the relationship the photographer, the photographed and the spectator enter into through photography. Most of the photographs and photography situations she discusses involve people in the midst of disaster resulting from their “flawed”, incomplete or lacking citizenship – many are drawn from the Israel-Palestine conflict. Azoulay basically argues that through photography a photographed person, even if she has no civil rights or possessions whatsoever, can exert a kind of agency through the photographic process. A photograph in such a case is a kind of appeal to the spectator, eluding the power of any government or other dominant force. Thus photography can be used to reclaim power, and to subvert dominant power structures that deny (some) people civilian status and hence practically all rights and protection.

Of course it is all far more complicated than I am suggesting here, but it seems important to my research, because it makes the trajectory a particular photograph travels over time a subject of study in itself. There are millions of photos of FDR and his staff closely followed what happened to which photos, and also had many photos taken by specifically appointed photographers (a way to control both the photographed and the photographer positions of the triad). In the long run the spectators have of course also changed, as well as the distributors and their reasons for showing a particular photograph. A key element of what particular images can be made to mean or suggest, is who of these actors had what intentions and interests.

Thinking in that manner about the wheelchair photo, it is interesting to regard it from the perspective of the photographed subject FDR, who clearly allowed this to be taken, indeed posed for it. Not perhaps initially with the intention of distributing it widely, but as it happened it is widely distributed and presents a particularly dignified image of his disability. From the perspective of the photographer, Margaret (Daisy) Suckley it could, if we adopt Geoffrey Ward’s account of her, be takes as a palpable proof of the fact that she was as Ward’s book is titled his Closest Companion, the only one allowed to see and photograph him here (Top Cottage, Hyde Park) and in his wheelchair. Viewers’ perspectives change over time and each viewer notices different things. But I would argue that the fact that many (post-1982) viewers have recognized the girl (incorrectly, as it happens) as Annie from the movie Annie, or have been reminded of that film, is meaningful. That movie and its portrayal of FDR inflect the way this photo is regarded, casting FDR’s disability in a particularly positive and ennobling light (because the movie does so). As such, the photograph, even though it predates the movie, becomes intertextual with it in the eye of many beholders, not because of any intention on the part of the maker or the subject, but because a new context has emerged in which spectators can view it. Interestingly, these viewers do not empower the real historical FDR (who hardly needed empowerment) but they do contribute to the popular perception of him as an iconic figure representing how people with disabilities can be powerful and gracious despite or perhaps because of their disability.