Foucault after 1984 and Jonathan Culler on Bad Writing 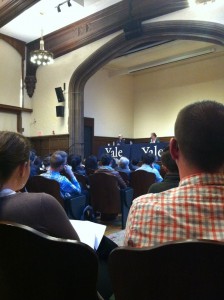 Yesterday I attended day 1 of a two-day conference at Yale titled Foucault After 1984. Michel Foucault is a very influential philosopher of the second half of the 20th century. To cut a long story way too short some of his most influential ideas include the idea that ideological institutions exert pretty much unlimited power over even our deepest inner selves (for instance by deciding who is mad or a criminal, and then “teaching” them a) that they are mad and b) how to behave, what to say, think and feel to be considered cured). Another famous Foucauldian insight is that power relations are embedded in and constituted through language. The fact that we have the word chairman is a reflection of the fact that people who preside over meetings are normally male, and the word perpetuates this situation. This is why many, when they do not refer to a specific chairwoman or –man, nowadays say chairperson (or just “chair”).

Foucault died young in 1984. I was nearly three so do not remember, but this was a big thing in academia and elsewhere, because he was a paradigm-changing figure. This weekend’s conference program was also made up of very big names, including Judith Butler, an important philosopher about half a generation younger than Foucault whose work learns a lot from and is almost always in conversation with his. Especially during her talk the auditorium was packed. About ten minutes into her talk security people came in (according to Foucault precisely the kind of identity-moulding, ideologically charged bearers of institutional authority that we must critically engage with and resist) to clear the aisles because they might pose a fire-safety risk. Judith Butler, rather neatly I thought, invited the attendants who were about to be thrown out of the room onto the stage (which of course was empty, except for herself – the photo was taken later on at a panel discussion when there were fewer people there).

I did find all the presentations very difficult to follow. Actually, I’ve lately been thinking that I should train myself more in the jargon of cultural philosophy and hardcore literary theory. Like many people, I tend to want to resist it, because it is very difficult to understand and operationalize (make useful or apply) in understanding concrete texts (or people, like FDR). I’ve often had the experience of working very hard to get to grips with philosophical texts (reading, rereading, looking up words I thought I knew, etc. ) and then thinking: “I get what they’re trying to say now, but I don’t believe it’s right”.

I know this experience is widespread because the journal Philosophy and Literature has a special Bad Writing Award (which in fact was “won” by Judith Butler years ago – unfairly so, I hasten to add, the sentence that won her the award was perfectly clear in the context of her three-page article). However, one of my many sub-projects here at Yale is to read a theoretical text every day (or as much of one as I can stomach in about an hour). As part of that I read Jonathan Culler’s great article “Bad Writing and Good Philosophy” in his book The Literary in Theory. Culler is a famous literary theorist and a crystal-clear writer himself, and this piece argues that it’s generally short-sighted to accuse philosophical texts of being badly written. I found it really convincing, which is saying something also about the question what my field is – historians usually hate cultural philosophy, or at least: don’t feel that it has a great bearing on their work, literary scholars usually do.