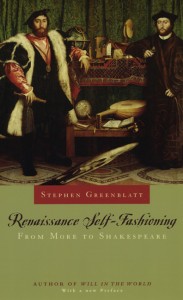 In 1980 literary critic and new historicist Stephen Greenblatt introduced the term “self-fashioning” in his book Renaissance Self-fashioning – From More to Shakespeare, to analyze how identities (selves) came to be more or less consciously produced (fashioned) in the sixteenth century and beyond. The idea is that the explicit molding of the self to suit social and cultural expectations is a strategy that evolved in early modern Europe. Although individuals were involved in their own self-fashioning, it was by no means a process over which they had autonomy: teachers, parents, bosses, kings, and peers through their different kinds of authority exerted influence over the shaping of one’s self, and one could, conversely, also contribute to the fashioning of other selves.

Greenblatt’s coinage clearly filled a gap in the market, providing a word for a process many wanted to discuss with regard to other persons than 16th-century English authors. Greenblatt himself already stretched the concept to include issues like the performance of a false identity or the fabrication of a public image, and later users of the term have gone further and further in doing so. Particularly in discussions of the production of politicians, self-fashioning is often used not to describe the process of the formation of the (internal) self, but the public image they project. But a consciously and autonomously projected public image is not the same as a socially and culturally molded self, even though many modern politicians would like you to believe that their public image is exactly who they “really” are deep down, because that would mean that they are authentic, “true to themselves” in their political role.

However, politicians in a mass-mediated, indirect democratic system can hardly be expected to “be themselves” when they are simultaneously expected to represent a constituency of thousands (or millions) of voters. Moreover, US presidents, particularly, also hold extreme power over the lives and deaths of millions of subjects, which as larger-than-life media personas they need to match with being at least seemingly personable. This production of political leaders’ public image, by themselves or their staff, I call autofabrication. Of course the self-fashioning of political leaders (the shaping of their character and internal selfhood) is important to their success as politicians and as mass-mediated public figures also, but to consider the two concepts to be identical implicitly buys in to the rhetoric of authenticity political leaders like FDR employ. And so my second proposition is:

“Stephen Greenblatt’s term self-fashioning is wide-ranging yet it has come to be used too widely to refer to too many diffuse processes of the making of identities, selves and public images by various agents. Autofabrication is the concept I propose to think about political leaders’ autonomous production of their own public image.”

Of course I hope that my coinage will be as successful as Greenblatt’s – that would be excellent for my own autofabrication.