Autofabrication as a Double Act 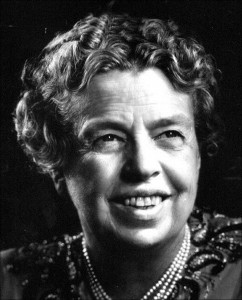 Eleanor Roosevelt is often hailed as the first politically active First Lady and, in reference to her internationalism, as “First Lady of the World.” She clearly established herself in the public sphere and political arena as an active agent, contributing to her husband’s autofabrication. Before FDR was president, when Franklin Roosevelt was recuperating from his polio attack, she often physically substituted for him on the campaign trail, holding speeches, and expanding his network throughout his home state New York and far beyond. During FDR’s presidency Eleanor Roosevelt worked hard on the margin of the political establishment. From that vantage point she could get political or public attention for some of the needs and interests of traditionally politically underrepresented groups. For instance, she was in close contact with representatives of various African American communities, and could give them access to the White House (sometimes literally) they did not otherwise have. At the same time this allowed FDR to cater to the white Southern right wing within the Democratic party. In a sense, Eleanor Roosevelt represented the White House in areas of society that were not the traditional domain of politics, for instance, in women’s magazines. After his death too, she kept representing her husband and what she considered to be “his wishes” – however, this increasingly became a way for her to assert authority without necessarily representing what Franklin “really” would have thought. In short:

“Eleanor Roosevelt has been instrumental in broadening the arena of politics, which was politically advantageous for Franklin Roosevelt, and contributed to her power as well as her invisibility in the traditional political domain.”