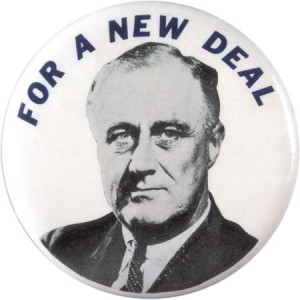 The sixth is by some distance the longest proposition. It engages political theory and gives an explanation for why Roosevelt has also been virulently hated by opponents. In common-sense terms: he was a slippery rhetorician. This is related to the previous proposition, in which I claim that Roosevelt’s success depended – and the success of his memory continues to depend – upon his malleability, and his flexibility to fit into many different, sometimes politically antithetical, narratives. When asked about his political beliefs, he once famously said: “I am a Christian and a democrat.” The two labels he explicitly espoused are so broad that they say nothing that would not be true for all American presidents (unless we hear Democrat with a D, but since this was said rather than written, there is no knowing which he meant). However, judging not from his words, but from his political deeds, he moved on the left of the political spectrum, and many of his New Deal policies were considered radical. His rhetoric tends to deny that, or at least does not acknowledge it in concrete terms. Through his consensual and often soothing rhetoric he in a sense avoided conflict.

Political theorist Chantal Mouffe argues that the space at the heart of politics – a space that once used to be filled by absolute monarchs – in a democracy should be open, and should be allowed to work as a space for “agonistic” (political) conflict, to avoid “antagonistic” violence. My thesis argues that Roosevelt’s rhetoric tended to fill up this open space at the heart of politics too much, and thus did not give room to necessary agonism. This irritated his opponents – not to the point it provoke outright violence, but enough to ignite an intense hatred, as well as to invite accusations of tyrannical behavior. Thus, my sixth proposition is:

“Through his rhetoric Franklin Roosevelt could appear more inclusive than his politics really were. Accusations that his behavior was regal were in a sense justified, not because he occupied the heart of god-given power as medieval kings did, but because his jovial non-committal presence filled the space at the heart of power which should have been a site for political agonism central to democracy (Mouffe, Lefort). Roosevelt’s remembrance has continued and strengthened this occupation.”