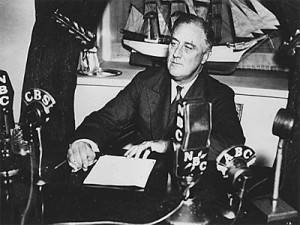 I categorically forbid my students to argue that someone was the first to do something. At least I discourage them, preferably by coming up with a counterexample showing that someone else did the same or something similar before. Now, in my first ever proper media performance, I’ve grabbed the opportunity to fall into my own trap. Of course FDR wasn’t really the first spin doctor! At least not without adding a list of buts and nuances. What about Augustus who put his face on every Roman coin! Wasn’t that a supremely brilliant example of creating your own public image in the most literal sense? Yes. Everybody who was kind enough to email me about this blatant stupidity: thank you! I stand corrected (and shamed, particularly for those students who told me to practice what I preach).

And yet Roosevelt was the first in some things, if only because he was the first American president who had access to some newly available media. He became quickly and lastingly famous for his radio speeches (Fireside Chats). He wasn’t actually the first president to be broadcast on radio, but he was the first to consciously develop a radio style. Hitler’s big speeches were also broadcast over the radio, but they were actually those scary stadium speeches, lacking the intimacy of the metaphorical fireside that was crucial to FDR’s radio addresses. 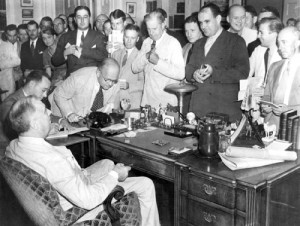 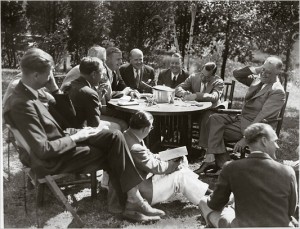 These pictures don’t only give an impression of what those press conferences must have looked like, but are very intriguing proof to my mind that FDR was actually also an early spin doctor. They seem to me extremely posed (why indeed did these journalists agree to be used in this manner?). The press in America is traditionally seen as the fourth leg of the the Trias Politica – newspaper men are the watchdogs of democracy, checking whether We the People are being treated as we should by notoriously devious and powercorrupted politicians. FDR was a master at turning the watch dogs into lap dogs. And they, in this early phase of modern mass media, were naïve enough to let that happen. It didn’t stay that way. As reporter John Gunther wrote about FDR’s press conferences in 1950:

In twenty minutes Mr. Roosevelt’s features had expressed amazement, curiosity, mock alarm, genuine interest, worry, rhetorical playing for suspense, sympathy, decision, playfulness, dignity, and surpassing charm. Yet he said almost nothing. Questions were deflected, diverted, diluted. Answers – when they did come – were concise and clear. But I never met anyone who showed greater capacity for avoiding a direct answer while giving the questioner a feeling he had been answered.

And that, I think, is what current day media trainers teach the politicians in their charge.